If you’re new to my adventure with baby food check out the full journey by taking a look at Taking On Baby Food, Making Baby Food and Tons Of Baby Food.

In my last update on my adventures with making homemade baby food I made mention of how babies are born with a surplus of Iron which is used up gradually. Right around six to seven months babies run out of this surplus and then it’s time to introduce new foods.

Off to the store! I have been using Gerber baby foods as a bit of an outline for what to do next when it comes to introducing new foods. I noticed some different fruits that I hadn’t yet introduced as well as some vegetables and also the proteins that were my main goal. So I grabbed some chicken breast, some organic chickpeas, frozen blueberries and some spinach. Then I made my way to the local farmers market and grabbed a quart of plums.

Back at home I made some fun new combinations that were sure to please. For the most part apples are my common denominator because they’re familiar and the baby loves them. I made the following combinations and have since tried out a couple. 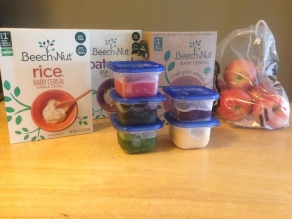 (From top to bottom, left to right).

*Indicates what has been tried, tested and baby approved.

The spinach, blueberry and chicken combination looks like toxic sludge (left, middle) or at least that’s what I’ve nicknamed it. Before even putting this one into containers I tried a bit and gave some to the baby to make sure it was taste tested. Despite it’s odd color, it’s actually not a bad flavor.

reheated. We already had the Beech-Nut Oatmeal Cereal and now

we also have Beech-Nut Rice Cereal. I really love their products because they’re all natural and organic but they are also super affordable (cheaper than the Gerber brand).

Moving forward with new flavors and foods I also purchased a container of the Gerber Puffs, which I won’t be buying long term. Puffs are expensive and can easily be replaced with Cheerios once the baby gets used to the act of chewing and swallowing food that isn’t pureed. I have also been pureeing his fruits and vegetables for less time to increase the thickness and get him ready for more advanced foods. All of that being said, I do believe in starting with Gerber Puffs for snacking because they almost dissolve in your mouth which makes it easier for baby to break down and swallow.

I’m so happy that we have a freezer full of baby food again. Having a large amount of pre-prepared, homemade baby food tucked away and ready to go is such a great feeling. I didn’t make too many containers of the chicken baby food (probably about twelve). The reasoning for this is that I have seen the estimated shelf life of cooked chicken in a freezer set as low as two months and go as high as nine. To be extra cautious I’m going with two months, so I thought it best not to over prep. I also “over” cooked the chicken a bit and then removed the crispy outer skin to be 150% positive that it was bacteria and salmonella free!

If you’re making homemade baby food and are curious about it’s shelf life, check out this freezer chart by following the link to whatscookingamerica.net.

Forever hoping that I can help someone on their journey with making homemade baby food. If you would like a step-by-step with pictures for any of these recipes leave a comment below.
Ta-ta for now!